Cambodia: …the Bad and the Ugly

As promised, this is the last post about the negative things I saw in Cambodia, with many beautiful and hopeful posts coming soon about all the great things happening there.  🙂

As I’ve mentioned before (click here to see previous posts), I was a bit surprised to find that Cambodia wasn’t as much like Thailand as I’d expected it to be.  There are a lot of similarities, but I didn’t expect Cambodia to be as underdeveloped as it appeared to me.  After learning about the effects of the Khmer Rouge’s rule on the country in the 70’s, it made more sense to me.  Cambodia has had a lot to overcome.

Below are some photos of some living conditions I was able to see in Phnom Penh.  It is known that some young women from this neighborhood have been sold into prostitution to help earn money for their family.  I was able to see some organizations that are working with people from this exact neighborhood, so that was encouraging.  I’ll be posting about that organization soon.    This web page explains Cambodia’s poverty situation in an understandable way (over 30% of Cambodians live below the poverty line).  The rural areas are even more affected by poverty as their traditional agricultural methods that don’t produce for quick profit. 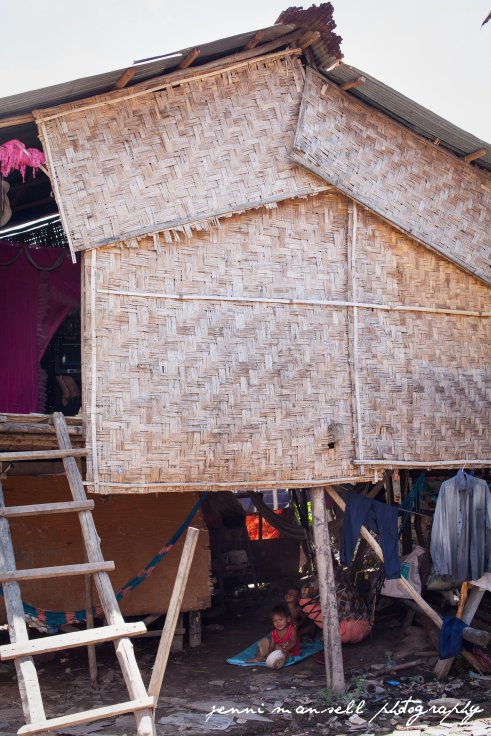 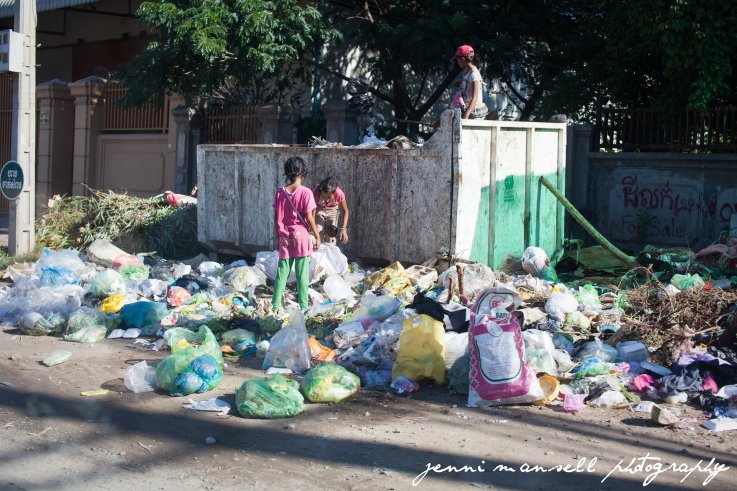 This is the home of one of the girls being helped by a program that provides training and work for young women at risk of being sold into prostitution.

Another sad part of Cambodia’s story is its high rate of human trafficking.  Last fall, my friend led a book study on the book Not For Sale by David Batstone.  This book is very eye-opening to the problem of present-day human slavery all over the world.  The projects I visited, associated with the Center for Global Impact, and many others are working to fight against this problem.  Specifically in Cambodia, there is a problem with children being sold into prostitution.  Of Cambodia’s 15,000 prostitutes, 35% are under the age of 16 (click here for the source of this statistic and more information).  Here are some of the sights I saw that opened my eyes to this heart-breaking problem. 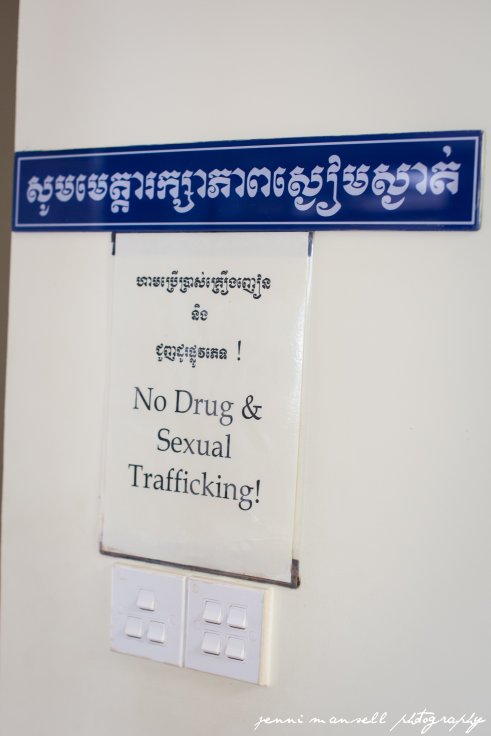 Sign from another hotel where I stayed in Battambang 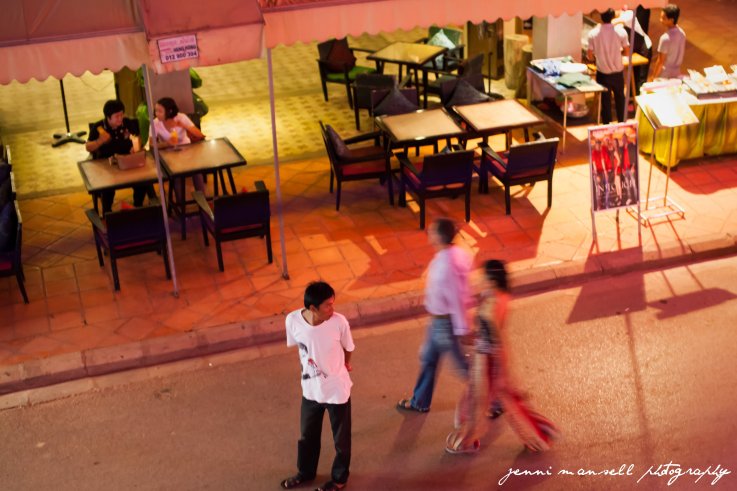 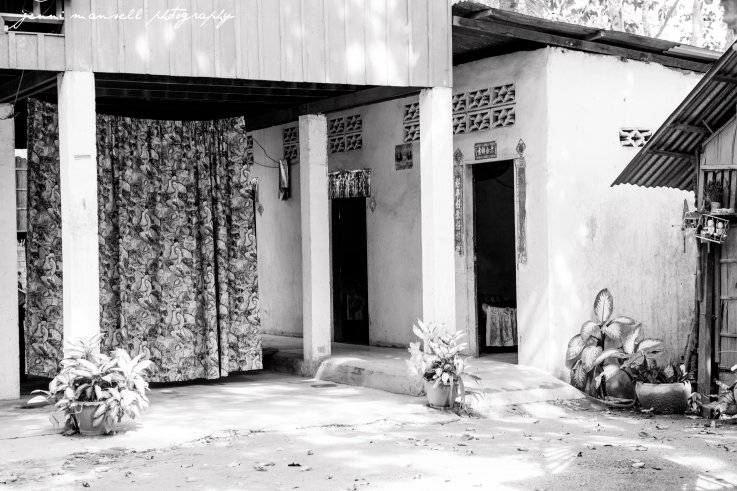 One of the karaoke bars near the airport that are known more for the prostitution available in the area than actual karaoke. 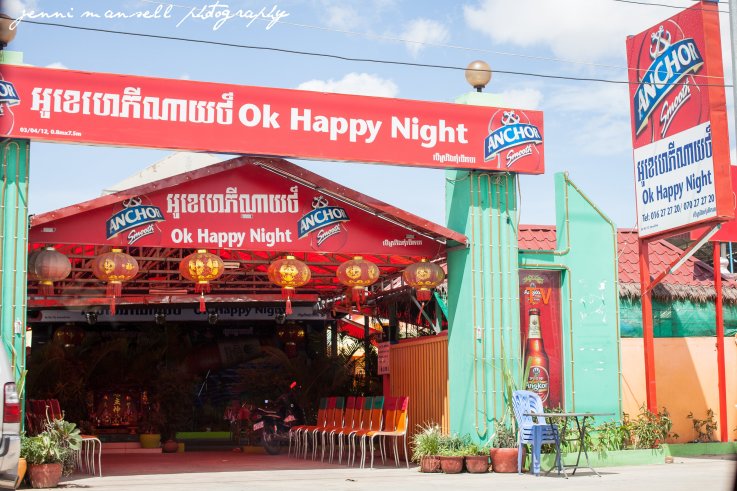 A karaoke bar near the airport where the women are lined up in chairs every night, basically a modern day brothel…

So, poverty and young women being sold into prostitution… sorry about the downer post.  However, there’s good news!  Organizations like Center for Global Impact, Hagar International, International Justice Mission, and many others are working to both help prevent and rescue women from this modern day slavery.  Just last night I heard an amazing woman, Somaly Mam, speak here in Indianapolis about her own experience of being sold in Cambodia’s sex trade as a little girl and now she’s helping save and assist in the recovery of thousands of girls.  Learn more about her organization by clicking here or read her book, The Road of Lost Innocence.  Stay tuned for more photos of beautiful Cambodia and the great things going on there.

I am so excited to finally be able to start posting photos from my adventures in Southeast Asia in June and July of this year.  I should probably start by explaining how I got to go on the trip, why I chose Cambodia, and why I’ll be doing so many blog posts about it.

This past February (on my birthday, no less), I found out I received a Teacher Creativity Fellowship from the Lilly Endowment to pursue my proposed project.  After hearing about Cambodia from my friends who are living and working there and doing a book study about the problem of human trafficking with the book Not for Sale by David Batstone, I had a great desire to learn more about the country.  I also wanted to see what the organization my friends are working with, Center for Global Impact,  was doing to help with the problems prevalent in the country.  So, I proposed to study photography and go to Cambodia over the summer to capture Light in the Darkness:  Beauty and Trauma in Cambodia.  Through these blog posts of photos that I took in Cambodia, I hope to share a piece of my experience and some information that will show both the beauty and trauma that I saw in Cambodia.  It is my hope that these posts will show both the needs that are present, as well as the hopeful and productive things occurring in the beautiful country of Cambodia.

I’ll begin with my first day there, which was spent outside of Siem Reap visiting the ancient temples of Angkor Wat.  My friends Katy and Alan were gracious enough to endure a very hot day exploring this area and brought their friend, Ryana, along for the fun too.  There was so much to see and I know we only touched the surface.  This post is dedicated to the mother of all the temples, Angkor Wat.  The grandeur and scale of these constructions are difficult to show on a screen like this, considering the manpower, hours, and labor that must have gone into this back in the 12th century.  Angkor Wat is the world’s largest religious monument.  It was built between 1113 and 1150, with many additions built later.  It was built to represent a microcosm of the Hindu universe with the five peaks symbolizing Mount Meru, though over the years more Buddhist symbolism was added to the sites which you will also see in some photos.  Click here to see an aerial photo of the area… it really helps you to see the magnitude of it!

The view from outside the moat and the sandstone causeway 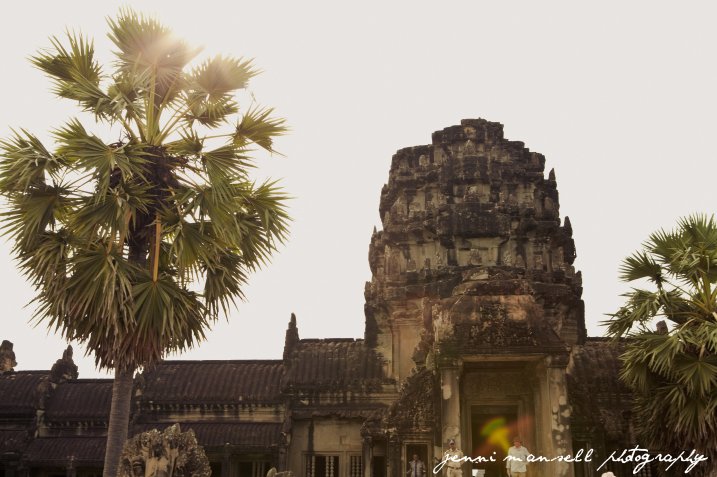 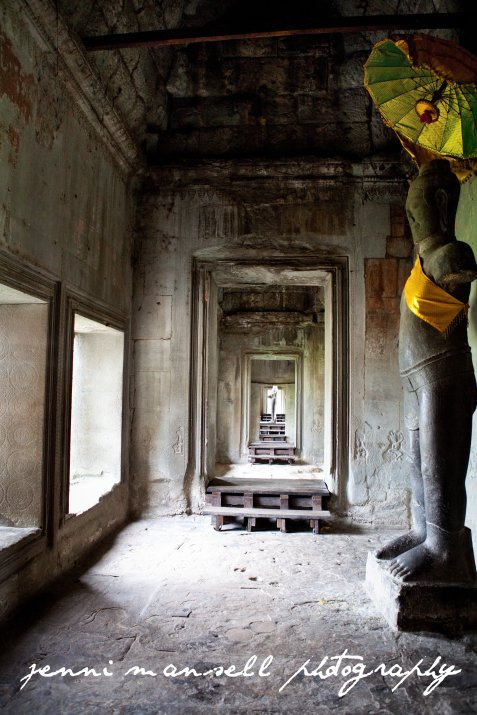 Looking to the left in the main entrance gate 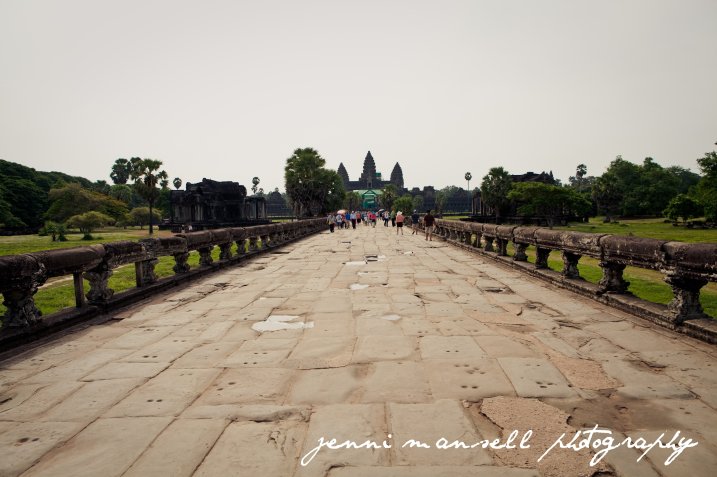 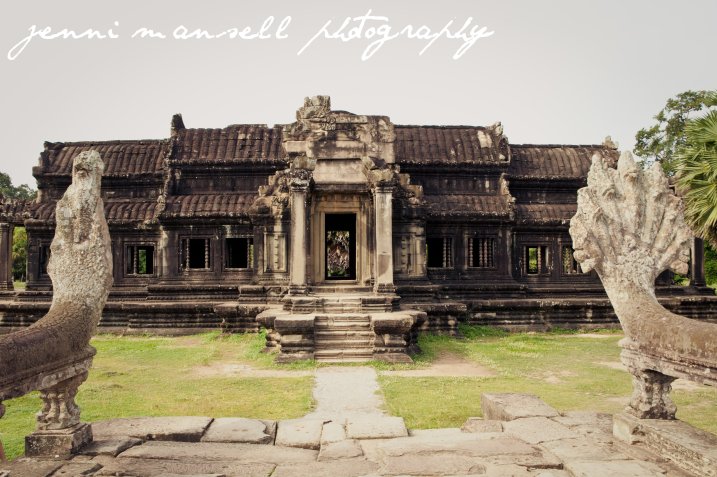 I think this is the Library, but don’t quote me on that. 🙂

The central temple view from the pool

A little monkey outside the central temple entrance 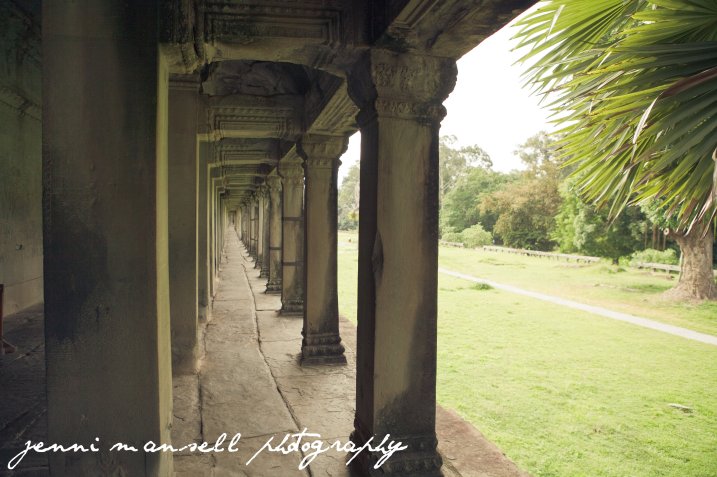 The roofed section covering help to cover the 800 meter long series of bas-relief carvings that go the whole way around the temple. 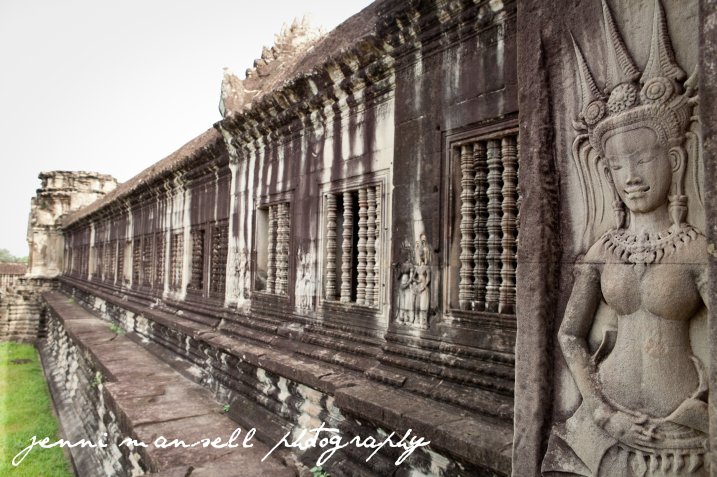 Working our way up to the towers… 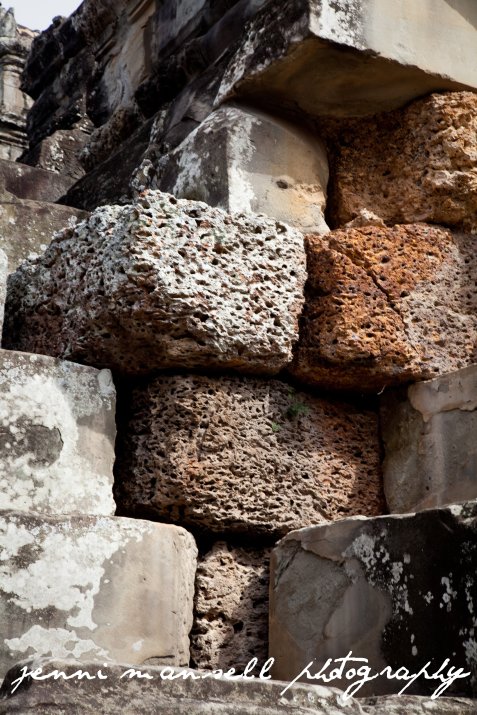 Laterite blocks were used for much of the structure, but were hidden and covered with stucco before being painted. 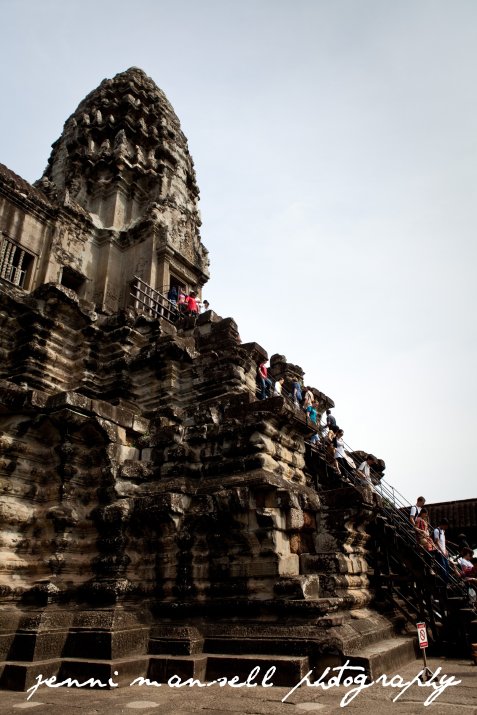 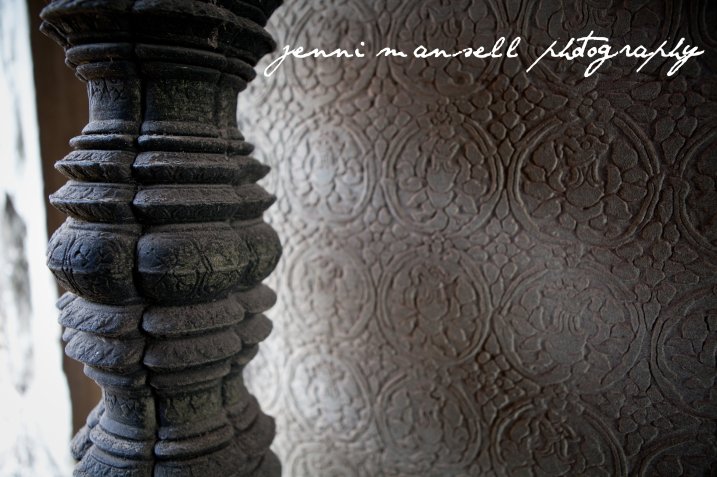 This is a lathe-turned baluster (so says the Ancient Angkor book that I bought!).

Originally built as a Hindu temple, it now holds many Buddhist shrines scattered throughout the temple. 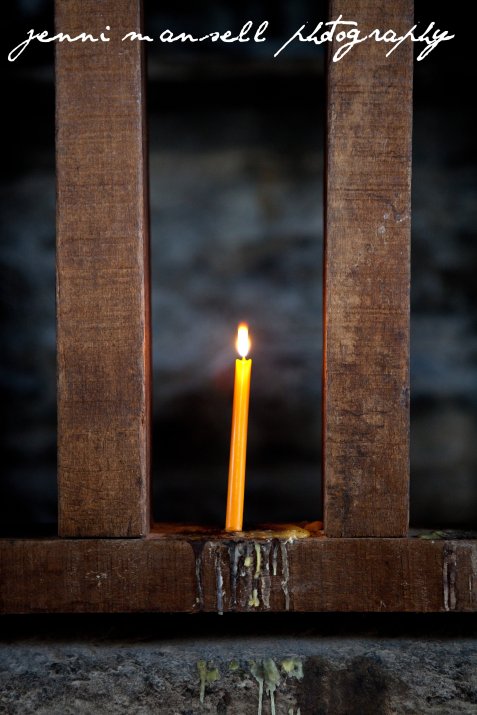 At one of the Buddhist shrines 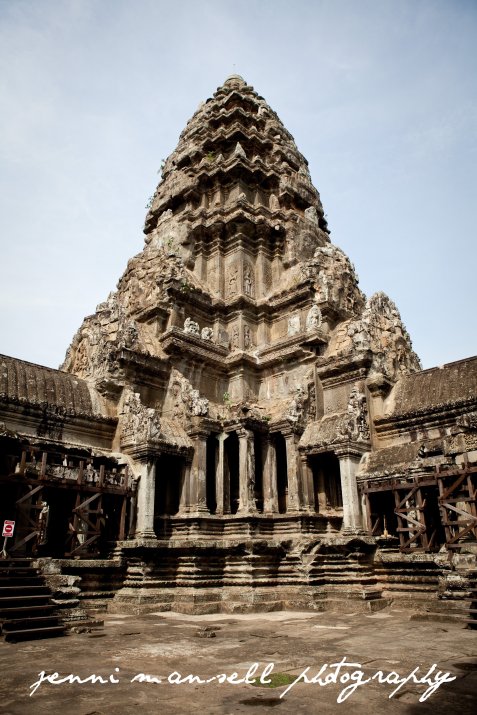 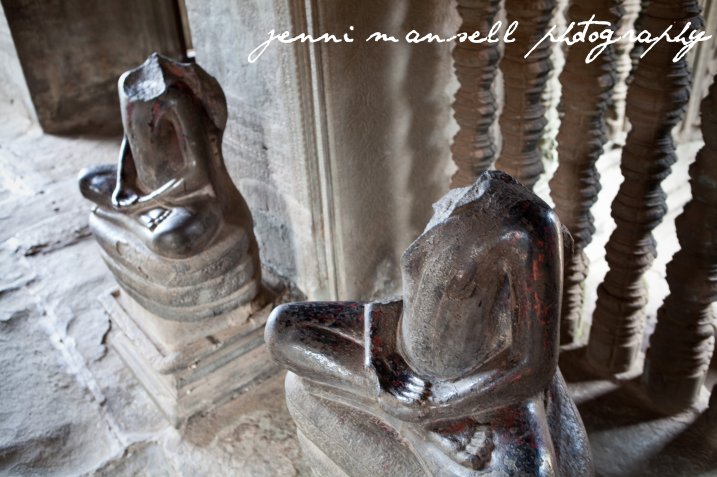 Weathering over time and vandalism from the time of the Khmer Rouge have left many artifacts damaged.

The way back down. The original flight was steep to symbolize the difficult task of reaching the kingdom of the gods.

Looking out at the retaining wall and a view of the sightseeing yellow balloon in the distance. 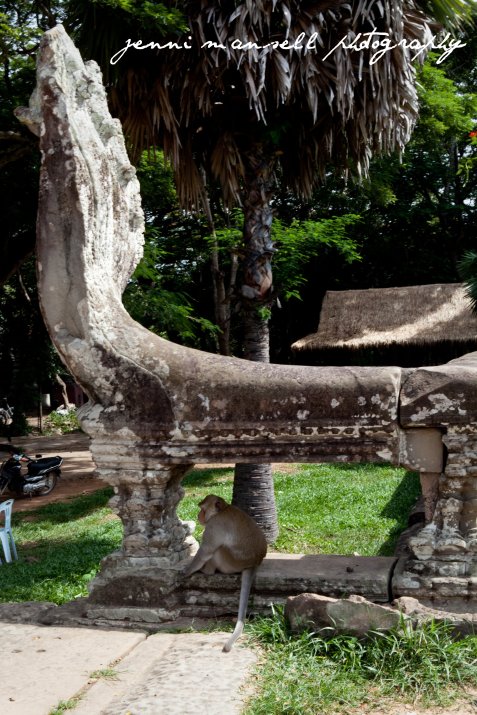 A monkey under the dragon as we left the temple 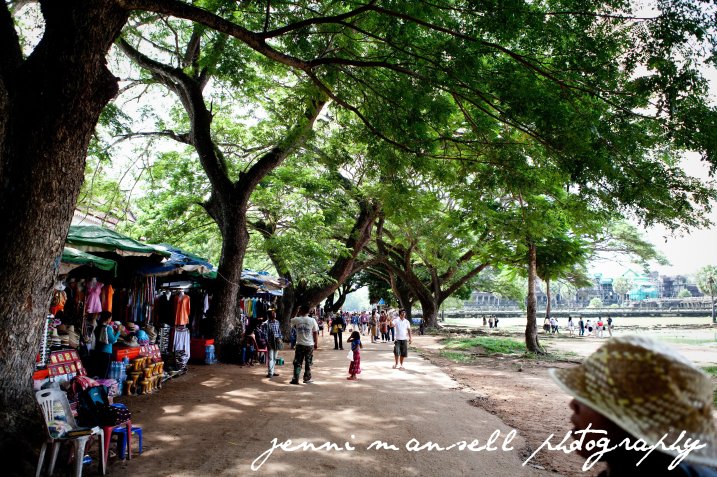 Booths set up outside the modern day wat with food and souvenirs and very eager sellers. 🙂 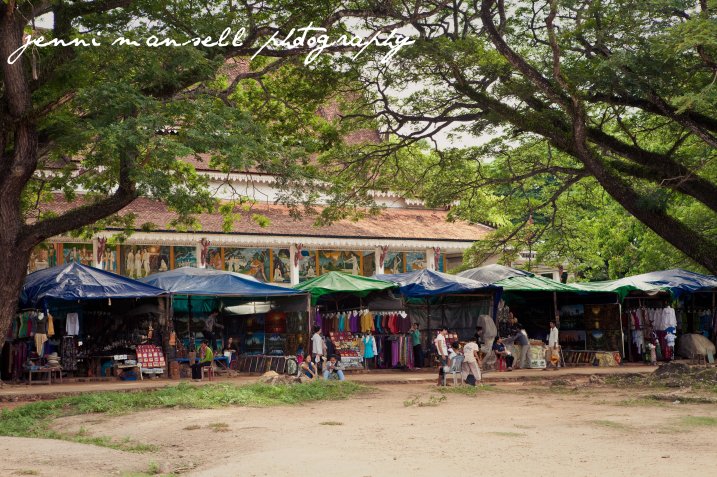 Between the central temple and the outer wall

With my wonderful friends, Alan and Katy, who endured a very hot morning in Cambodian heat so I could explore the Angkor temples.

A picturesque spot to rest. 🙂

I still can’t believe I was there!

I hope to be more consistent in my photos posts from this trip in the coming months.  Look here for some of my previous posts with observations from my time in Cambodia, Malaysia, and Singapore.  Thanks for checking in!  Feel free to leave some comments, observations, questions below!

Hello again!  I’m finally getting a chance to sit down at a computer and thought I’d send a reflection your way via this blog.

I continue to have a really great time seeing the good, the bad, the ugly, and the hopeful here in Cambodia.  It’s been an slightly overwhelming time with so much to take in in the short week I’ve been here, but really great overall.

Instead of giving you the play by play on all I’ve seen and done, I’m just going to share some fun tidbits along with some other thoughts on my brief time here.  Please note that I realize that I’ve only been here one week and I am a clueless American.  Being someone who loves to experience new cultures and knowing that our culture is equally foreign and strange to those who visit it, I hope these comments do not offend anyone and the non-expert source will be considered while reading.

If you made it through the list, thanks for allowing me to share a few pieces of my experience.  Tomorrow is going to be a tough and heavy day as I visit the Killing Fields and S21 museum to learn about some of Cambodia’s darker Khmer Rouge history.  Tough stuff that I’m not sure how to take in, but I’m thankful that it’s something people are willing to learn from today in hopes that history will not repeat itself.

Thanks again for reading.  Until next time…