Like ripping off a band-aid quickly, I’ve decided to post all of the sad stuff I saw in Cambodia in a row to get it out of the way.  As I continue to share Cambodia through my lens (click here to see previous posts), I do think it’s important to learn from history and not just brush over atrocities such as this.  I wanted to get a full look at what makes Cambodia the place it is and this is part of it.  Just a couple more posts of the bad and then I’ll post all the great, hopeful, beautiful things I saw.  So please stay-tuned!  The best is yet to come.  🙂

When I arrived in Cambodia, I was expecting it to be pretty similar to Thailand (where I spent the summer of 2003).  I was surprised to find that Cambodia seemed less developed than Thailand overall.  After learning more about the effect of the Khmer Rouge’s rule in the 70’s, it made a lot more sense.  When almost a quarter of a country’s population gets wiped out in four year period, it’s no wonder that it’s taking a while to get back on their feet.

When in Phnom Penh, my friends were gracious enough to accompany me on a very tough day visiting the Tuol Sleng Genocide Museum and The Killing Fields outside the city.  This post documents what I saw at the S-21 Prison, now called the Tuol Sleng Genocide Museum.  Please know that some of the descriptions and photos below could be considered graphic and are very sad.
I am no expert on the Khmer Rouge and I realize that I cannot explain everything about it in this little blog post, so please feel free to do some research on your own if you’d like more information.  I read the book First They Killed My Father by Loung Ung and was given a heart-wrenching look into one girl’s experience living through the Khmer Rouge rule from 1975-1979.  Netflix also has a documentary on this specific prison.  Click here for Wikipedia’s information about the Khmer Rouge.  Basically, the Khmer Rouge, led by Pol Pot, took over Cambodia to restructure it into a peasant-dominated agrarian cooperative.  They had to get rid of much of the population to accomplish this goal.  Much of my information about this comes from what I learned from the Lonely Planet Cambodia guidebook, by the way.

Tuol Sleng was Tuol Svay Prey High School until the Khmer Rouge took it over and turned it into a prison in 1975.  From then until 1978, over 17,000 prisoners were taken through the school’s corridors before being taken to the Killing Fields of Choeung Ek (which I will post about soon) where the majority of those prisoners were killed.  Much like the Nazis, the leaders of the Khmer Rouge kept very detailed records of each prisoner who went through S21.  The museum was full or photos of men, women, and children who were brought there.  Virtually all of them were killed soon after.

I found Tuol Sleng to be a very disturbing and sad experience.  It quickly brought to mind other stories of genocide that have occurred across the world and throughout history.  The evil human beings are capable is almost inconceivable, yet there are evidences of it everywhere.  It’s hard for me to know what more to say about that except that seeing things like this reminds me once again how much we need God and how thankful I am for His work in the world through Christ.  As I said before, the positive stories are coming soon, so please stick around!

Until then, I’ll let these photos speak for themselves.

Hard to believe an educational institution could turn into a place of such sadness. 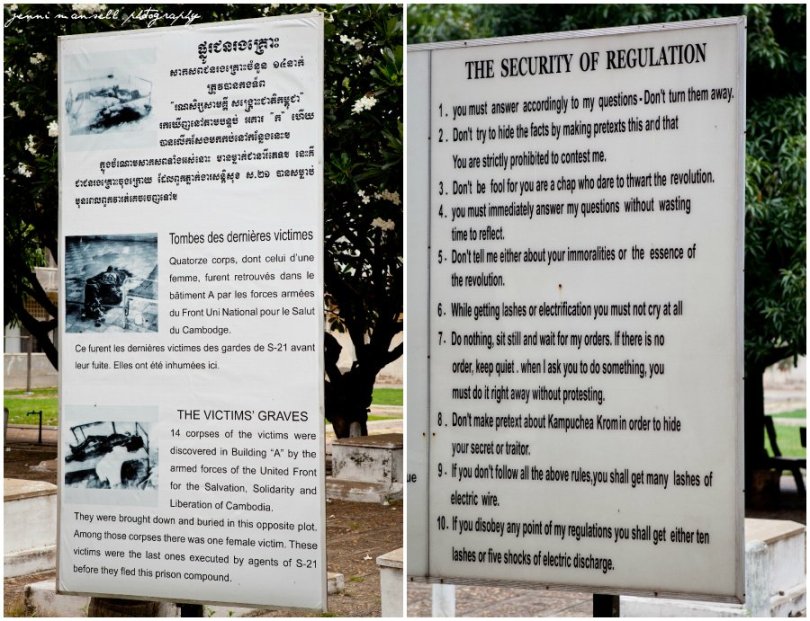 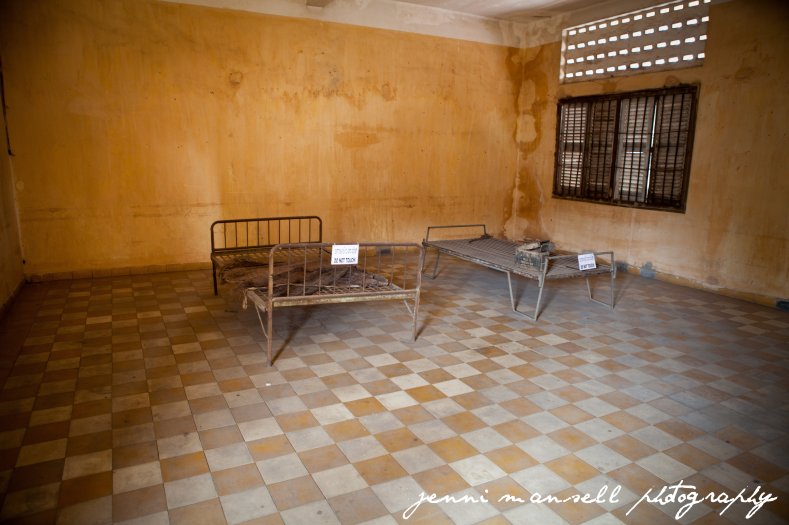 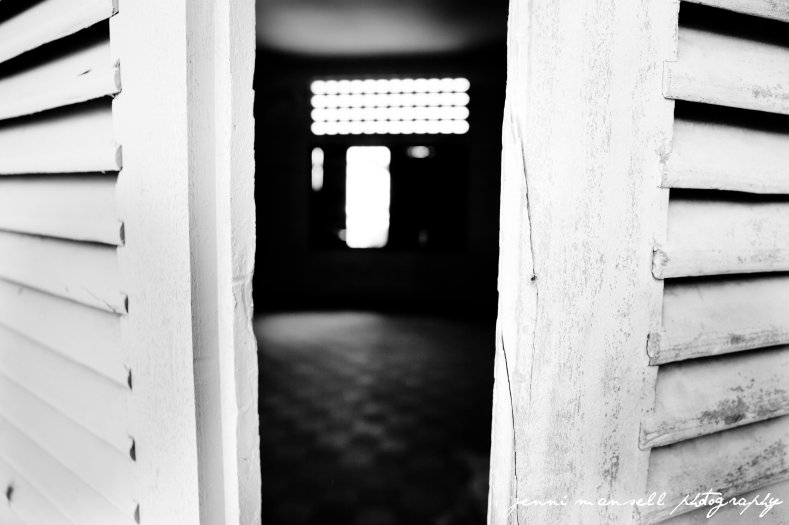 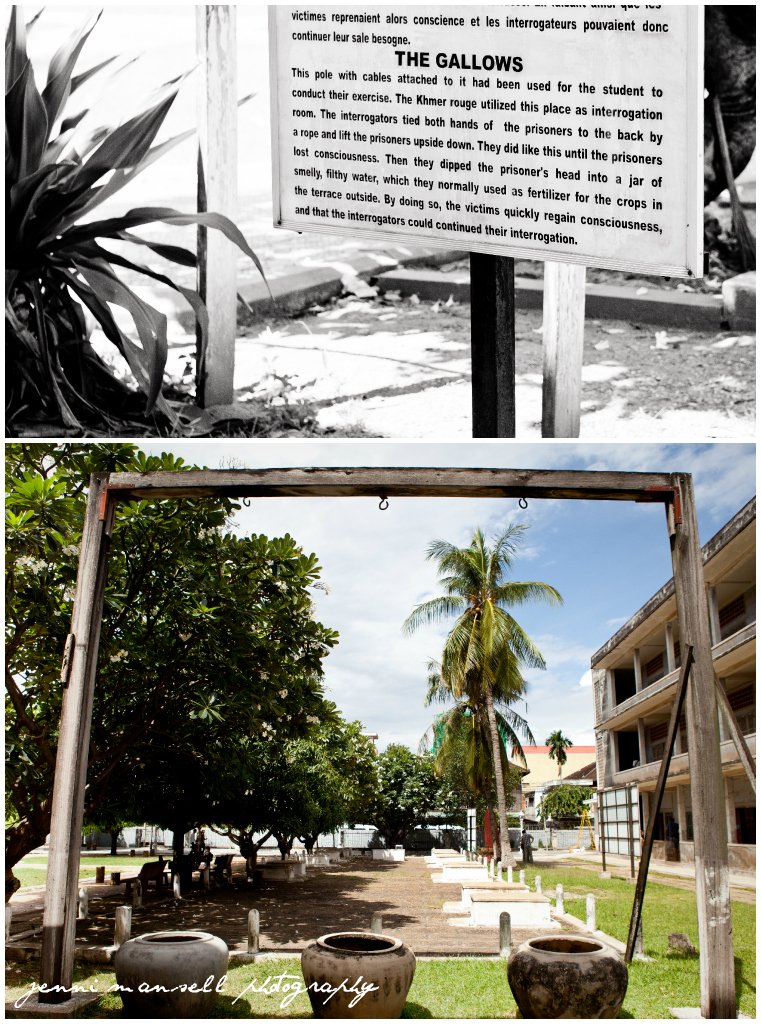 No laughing- though I can’t imagine anyone being tempted to do that in this place. 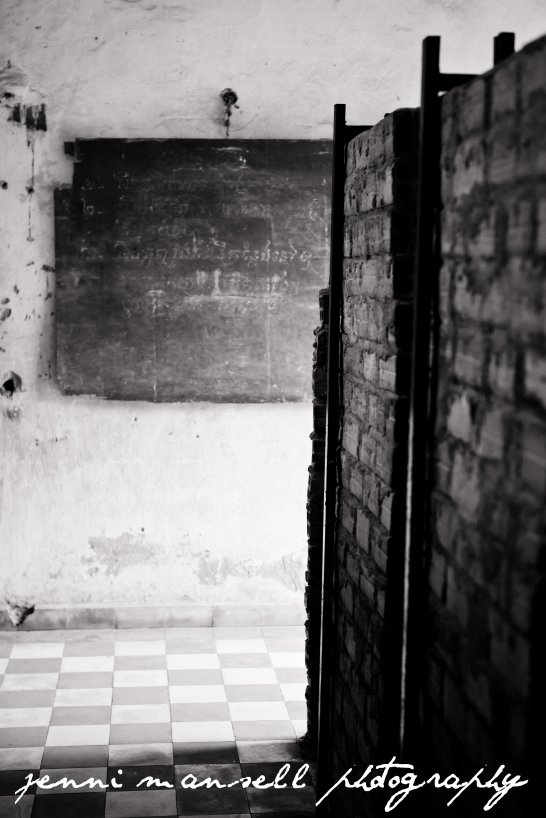 Looking through a cell door 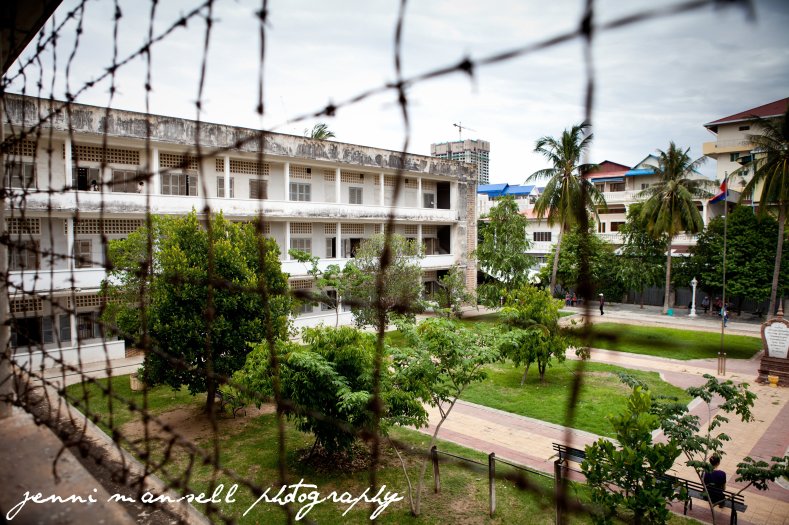 It felt strange to look at the beautiful green and flowery trees and to think about how the prisoners must have felt about this place.

By far, the most heart-wrenching part of this visit was seeing all the photos of prisoners, men, women, children, and babies who came through those gates.  Seeing the look in their eyes as they anticipated what to come led me to tears.  I can’t imagine the horror they went through. 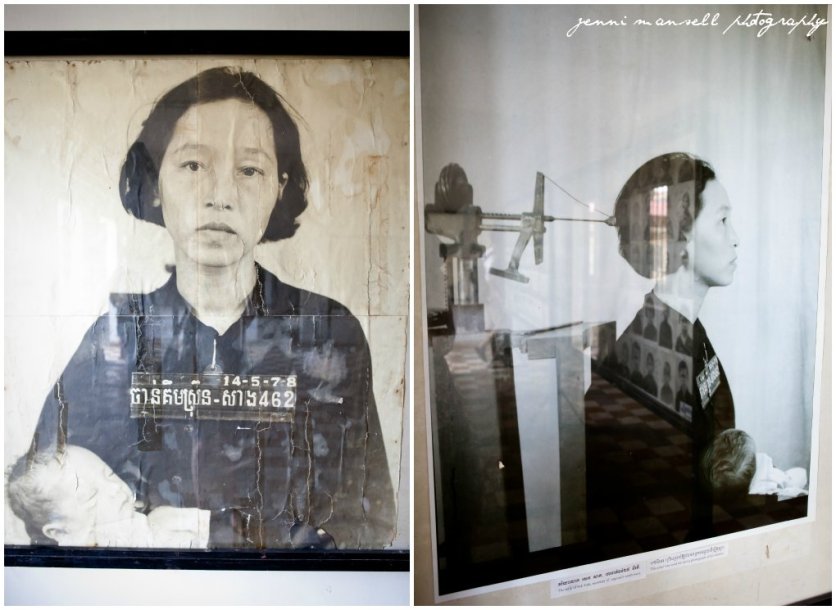 This shows how every prisoner was forced to be photographed with a contraption holding their head up behind them.

The Khmer Rouge tried to wipe out the educated class, so people had to try to hide the fact that they were educated to escape being killed. This man was a doctor of law.

Remains and a memorial for those killed